In this article, we explain why the best food waste depackaging systems now available don’t hammer the packaging into shreds anymore, and there is no doubt that this is an important point to appreciate with the rising importance of food waste avoidance and processing.

There is a growing selection of food waste depackaging systems that are also appropriate for non-source-separated biodegradable municipal waste (BMW). In an effort to help stop global warming the trend now is to increase organic waste recycling to ever-increasing percentages. This makes sense in order to avoid this material going to landfills and to meet the COP26 pledges made by so many nations to decarbonize their economies.

Regardless of how well-trained personnel are in source separation of food wastes, the purity of source-separated organics (SSO) will always be less than perfect, and in some cases much less. It’s not realistic to hope that lazy people will ever stop to think before they sling their plastic bottles, wrappers and anything else they don’t want, into food waste bins. So, there must now be a big investment in automatic machinery to sort out the mess when all manner of packaging and other trash gets thrown into food waste bins.

The most effective Food Waste Depackaging Systems reliably and quickly separate organic from non-organic packaging materials, including plastics and paper. They are ideal for converting waste from the food processing industry, supermarket and restaurant waste streams, and any other recyclable food items into a profitable, value-added product. 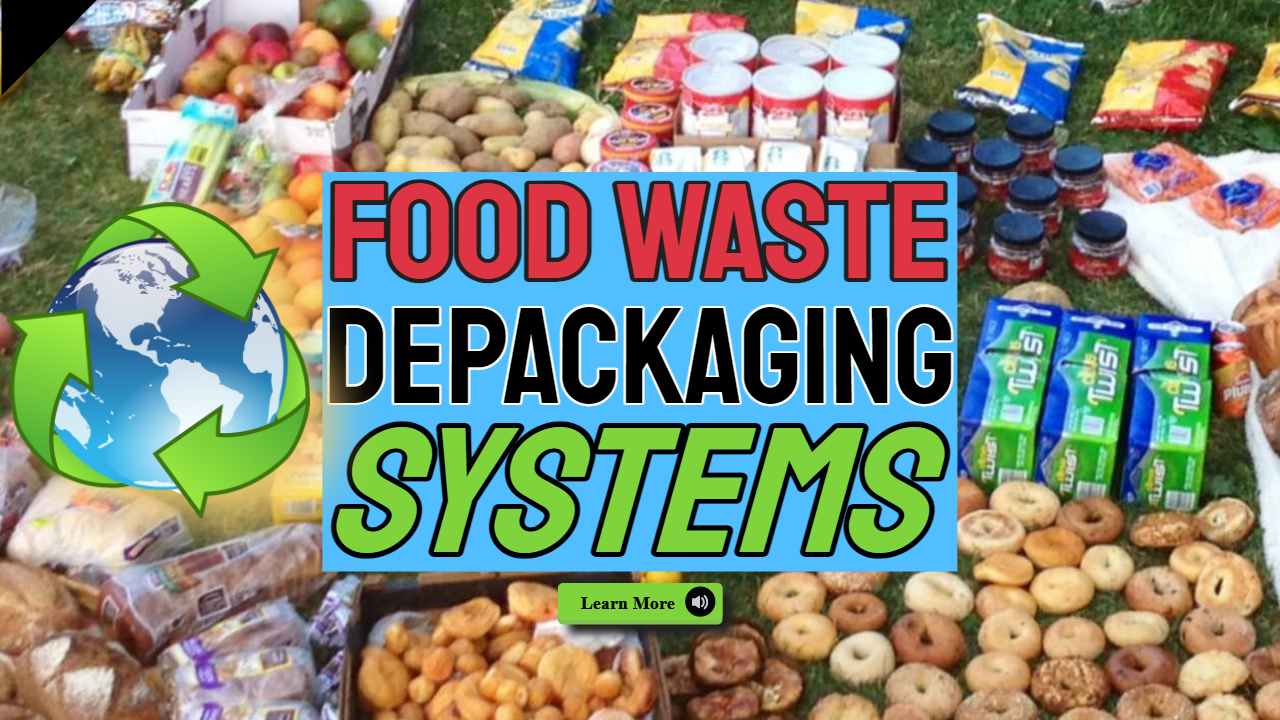 The first task for de-packaging machines and associated separation equipment is to:

The reject stream will contain varying amounts of packaging, but the majority of food waste and mechanically separated organic content, such as BMW (also known as OFMSW), will contain a significant amount of plastic in some form.

Reducing Water in the Output Streams

It is critical to avoid the presence of moisture in the reject stream because moisture-laden content invariably contains calorific organic material, which every biogas plant or compost facility operator wants to see in the pulp where it produces biogas – the plant operator’s source of profit.

Depackaging machines separate the outside containers (wrappings) from the contents inside the food box, packet, tin, drum, sacket, and so on, allowing organic waste to be recovered or recycled rather than being disposed of in landfills. The need to reduce food waste has become increasingly common among businesses and local governments around the world.

Because of the amount of plastic present, even source-separated food waste cannot be directly fed into the biogas production process/biogas digester. Plastic packaging is always present, whether it is discarded by householders or catering facilities, and if allowed to remain, it will have a negative effect on digestion.

All packaging containers must be opened before entering a digester tank, and the water content of both the pulp and the rejects (plastics and other materials) must be low. All of these conditions must be met in order for suitable food waste material to enter the digester tanks of an anaerobic digestion plant. Plastic separation after digestion, although common in the past, should be phased out.

Food waste depackaging systems come in a variety of designs, with some employing a hammermill and others employing a shredding machine. Others employ paddles, while still others use a squashing and squeezing action. The depackaging scene is reminiscent of the early days of the automobile.

To begin with, each make of car was very different. Motor vehicles gradually became more similar until today, when technological progress has brought us to the point where each car has a combustion engine and the foot pedals, steering wheel, and clutch are all the same. One day, it will be the same for the repackaging industry, but for the time being, the systems used vary greatly.

Disadvantages of the Hammer Mill Approach of “Smash Everything Up”

A hammermill uses a lot of energy to break and smash everything into small pieces. The rotating hammers open the food waste packaging and break apart all materials, leaving only the organic material to be strained out. The only issue is that because everything has been broken down so small, the resulting mash contains a lot of microplastic. That is the most difficult type of plastic to sort and reprocess, as well as the most harmful to the environment and wildlife in particular.

We believe that one important feature of depackaging machines should be that they do not rely on the strategy seen in early equipment. Size reduction should no longer be regarded as acceptable due to the environmentally hazardous action of increasing microplastic content, which is likely, at least in part, to end up in the environment.

Food waste depackaging equipment should be designed to do the opposite of breaking things up small. To open packages, it should use a variety of characteristics and less brutal forces. In the most recent models of this equipment, the centrifuge’s alternating tensile and compressive forces, as well as vortex action and a few rotating paddles, are used to break open the containers.

These forces can be used in tandem to separate solids and liquids (for example restaurant waste). Using these various characteristics and switches in a food waste depackaging machine can also improve the efficiency of subsequent AD plants and IVC (In-vessel Composting) operations.

“Food Waste Depackaging Systems” is the text on the image.

Packaging that is Less Fragmented

The most recent generation of multi-action food waste depackaging machines is intended to reduce the amount of fragmented packaging. The rotating paddles and flails aid in the breaking up of the packages. The flails and paddles transport the empty packages along the upper side of the processing chamber, and rejects can be ejected from the output point using water or air.

If you have a composting facility that handles similar waste, these machines may be well worth the investment because they can reduce contamination removal costs while also opening up new tipping fee opportunities for industrial food product depackaging and recycling.

More robust packaging, in items such as jars of honey in plastic containers packed within a cardboard box, will be completely depackaged as the horizontal or vertical processing chamber progresses the incoming material down the length. A turbo or vortex separator does not require the addition of water to liquefy food waste in order to depackage it.

What exactly is SSO Energy Recovery?

Energy recovery from municipal waste is the process of converting non-recyclable waste materials and packaging into usable energy such as heat, electricity, or fuel. This can be accomplished through a variety of methods such as combustion, gasification, pyrolysis, anaerobic digestion, and landfill gas recovery.

The Separator Machine by Cleanaway

Cleanaway’s latest food waste depackaging system separates liquid and organic material for anaerobic digestion. The rotating cylinder at the heart of the machine uses paddles to open and move the packages along and out of the chamber’s top. If the packaging is long-lasting, it will be depackaged by splitting, and vibration in some machines aids in the removal of stubborn dried-and-burnt-on food.

This is a potential choice for processing large quantities of packaged food, including restaurant waste. The depackaging machines have a wide range of capabilities, are compact, and require low maintenance. The technology contributes to the recovery of valuable organic materials.

In Victoria, the Cleanaway unit processes ten tonnes of packaged food waste per hour. The unit has the ability to recover up to 99 percent of the material. The glass is not processed by the unit. The process takes place in a separate chamber, where the packaging is broken by a squeezing action. The remaining materials are disposed of using anaerobic digestion after separation. This method conserves landfill space while lowering carbon dioxide and methane emissions. It will be the most efficient way to recycle your packaging if you have a depackaging unit.

Scott Equipment’s food waste depackaging machines have a horizontally configured chamber with rotating paddles and flails. At 400 rpm, these rotating blades shred the packaging. The SSO Model is a horizontally configured machine that breaks open empty packages with a hammer. There are two capacities available for these units. The larger unit has a capacity of 40 tonnes, while the smaller unit can process source-separated organics and BMW at a lower flow rate.

Another brand engaged in the challenge of better waste depackaging is the Dominator, which separates plastic containers and plastic bottles from the contents of the containers and bottles.

Other Depackaging and Separation Machines

Keeping food products out of landfills can be difficult, especially because many meals are tightly packaged. Some pots and punnets are very small and others can be far larger.

To separate the pulp and solids from packaged foods, a number of food waste depackaging machines use a hammer and then a screw press. Any depackaging machine model may use a combination of physical materials-characteristics, in addition to a hammer, to select and sort the incoming items. A hammermill, for example, can be fed by a counter-rotating dual-auger mixing/feeding hopper and separate the output from the liquid (fibres) by a horizontal or vertical-pressure screw press.

It may use a single characteristic to break the package while emptying the packages with a different set of selectors.

Drycake’s Twister also employs multiple characteristics to separate the recyclable organic fraction. While this may appear complicated, it is critical for effective recycling. The most adaptable machines use several combinations of these variables to depackage all types of food packaging.

Separated packaging can then be shipped to a recycling facility or sold as RDF, resulting in even more waste reduction while also providing the opportunity to generate additional revenue streams.

This machine can depackage a wide variety of wet and dry waste materials, such as food, pharmaceutical, and municipal trash, as well as tetra packs, tin cans, and plastic bottles.

The Tiger machine is a popular food waste depackaging unit. It could be the beginning of the AD process. The Tiger is used by many reference sites in the UK and is supported by its UK dealer, Blue Group. Tiger machine parts are available same-day or next-day for immediate delivery.

There are long gaps between the need for machine maintenance or repair, and it can be operated by a team of workers, with training available in any language.

To separate the solid organic material from the packaging, food waste depackaging equipment is used. The best equipment can also be used to separate BMW and OFMSW.

There has been progress away from a strategy of reducing the particle size of incoming food waste toward less destructive methods that aim to avoid the production of microplastics. The latest technology strives to keep film bags and packets almost whole and in one piece wherever possible. While ejected items are frequently not completely whole, they are usually in multiple pieces rather than pulverised into indistinguishable shreds and flakes.

To separate the organic fraction, modern equipment employs a variety of selector properties and characteristics. The organic material cannot be removed without proper depackaging and separation. Plastic packaging cannot be recycled without these machines, so food waste depackaging machines are critical for the plastic recycling industry. Not only are these units useful for the AD process, but they also help IVC composting facilities accept packaged food.

The process can be more streamlined, require less labour to supervise this equipment, and be more efficient with the latest technology. At the same time, the new equipment is beneficial to the environment. View the complete list of food waste depackaging and separation equipment suppliers here https://www.rinobs.com/food-waste-depackaging-systems .