Biomethane is a well-known and well-proven form of clean energy that is seeing increased demand globally, particularly in European countries, as one of the most cost-effective and environmentally beneficial alternatives to natural gas and diesel. As a vehicle fuel, the injected biomethane can be mixed with natural gas in any ratio.

However, because this is a new topic for most people, we’ve received a lot of inquiries about it in the comments section.

How far can one cow’s methane transport me?

It is believed that one milking cow’s manure has enough gasoline to drive a pick-up vehicle for about 5000 kilometres per year. This calculation assumes that a milking cow’s manure (including its children) produces around 1350 cubic metres of biogas per year, with methane accounting for 60% of the biogas.

Is it Really Going to Happen With Cow Fuel?

Yes. In the newly issued Gas Package, EU leaders pledged to make access to gas infrastructure and markets for renewable gases easier. The creation of a European renewable gas market is necessary to ensure that renewable gases are increasingly pumped into our gas networks. This will help to keep the gas sector’s decarbonization on track. 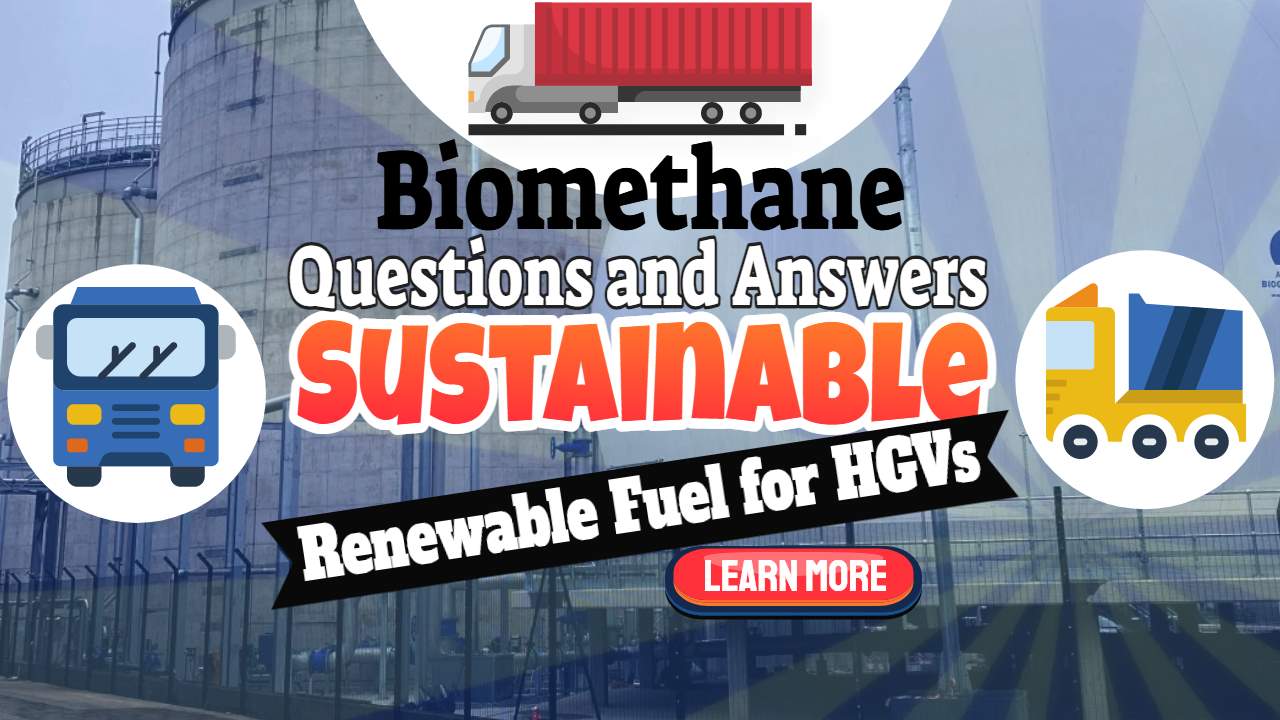 Do I Have Access to the Gas Grid in My Country?

The assured access to the gas grid for all biogas suppliers has been one of the key reasons for the rapid growth of the biomethane business in Europe.

The European Directives 55/2003 / EC and 28/2009 / EC place a premium on the use of renewable-energy-derived gas, citing biomethane as a potential solution to climate change. These guidelines oblige EU members to ensure that biomethane has unrestricted access to natural gas transportation and distribution.

Outside of Europe, the natural gas supplier industry’s readiness to let biogas plant owners inject their biomethane is variable. If your company is planning a biogas project, we recommend getting in touch with your local natural gas grid operator as soon as possible to see if you’ll be able to supply their system with your gas.

It is not necessarily essential for AD plant owners to have a gas grid injection connection. Biomethane may be physically delivered to a customer in the form of a full gas cylinder or a tankerload. For example, if the gas is compressed or liquefied and transferred to a consumer by road, or a car fueling station might be erected at the AD facility where it is produced/the biomethane manufacturing site.

Are the world’s most environmentally conscious countries interested in using biomethane for transportation?

Although Sweden, Germany, and Denmark are grid-connected and have a bilateral agreement to promote cross-border trade of biomethane GOs, there are still issues about how this programme may be expanded to other parts of Europe. Currently, Germany is the world’s top biomethane producer, with annual production estimated at roughly 60 TWh, compared to fewer than 100 TWh in Europe.

With over 1,000 biomethane injection projects in various stages of development, France is leading the growth of the biomethane sector. Biomethane production capacity in Europe has increased rapidly year after year, and this trend shows no signs of slowing down. With a growth of 0.39 GW in 2019, 2019 was the year with the greatest increase since 2014.

Is the United Kingdom Developing Biomethane?

Though the UK is no longer part of the EU, it also appears that they are not part of the EU’s green gas scheme. However, in December 2021, they began their own green gas programme.

Gasrec, for example, is a major supplier of RNG to the general UK HGV population. They operate a network of ten biomethane refuelling stations in the United Kingdom. With these, the company can refill around 1,250 vehicles every day. One of their facilities, at Daventry International Rail Freight Terminal (DIRFT), is one of Europe’s largest gas refuelling stations. They fuel about 40% of the UK’s gas-powered HGVs because of their strong market position.

There’s more. Gasrec is looking to extend its refuelling station network in logistics parks. BP has lately joined this sector as well, producing and supplying biomethane as well as constructing and operating fuelling stations. They, along with Gasrec, are ideally positioned to address the growing need for safe, renewable gas alternatives.

Will the rest of the world convert their HGV fleets to biomethane as well?

Because of rising vehicle production around the world, the global biomethane market is likely to increase significantly in the coming years.

Furthermore, biomethane’s flexible features, such as being less corrosive than biogas, make it a valuable fuel. Biogas, which can be produced from a variety of feedstock sources such as plants and animals, is also utilised as a raw material for biomethane production.

As a result, it is the most environmentally benign and efficient fuel for a variety of uses. As a result, these factors are likely to promote biomethane usage, propelling the biomethane market forward in the coming years.

Why not use natural gas instead?

Biomethane is a considerably greener and more sustainable alternative to natural gas derived from fossil fuels. It can be supplied into the gas system to feed homes, industries, public buildings, and other facilities once it has been adequately processed. The method of production differs between the two fuels.

Isn’t this going to result in farms producing fuel and people going hungry?

If biomethane is to get government subsidies, the UK government has strict sustainability criteria for the production process.

This guarantees that any feedstock crops cannot be grown on land that has been transformed from valuable natural habitats. Plus to be called renewable the fuel has to be from a manufacturing process that has a carbon footprint that is at least 60% lower than the European average for heat generation emissions.

Also, biomethane producers will be given the incentive not to use food crops under a new Green Gas Certification Scheme (GGCS) which will pay them more for not using any form of food crop. That will be the case, as occurs now with a lot of food production, that it would never have got so far as being eaten anyway.

Many farms experience reductions of more than 60% in mass during digestion, and AD plants also provide a valuable means for dealing with organic waste products while simultaneously producing a high-quality fertiliser that is utilised by farmers all throughout the UK.

The use of energy crops for anaerobic digestion is rapidly decreasing already, now that German subsidies on the use of food crops have been removed.

It was back in 2013, that the shift away from energy crops began, with agricultural residues, bio- and municipal waste, and sewage sludge taking their place. Since 2017, almost no new plants based on energy crops have been established.

It should be noted that energy crops can result in changes in indirect land use, putting further pressure on land available for food crop cultivation.

Is it true that road transport consumes more fuel than other modes of transportation?

Road transport is said to be responsible for 27% of total greenhouse gas emissions in the UK in 2019. HGVs account for only 5% of vehicle kilometres travelled, but their emissions are disproportionately higher, accounting for roughly 16% of all road transport emissions.

Is Biomethane a Technology in Transition?

Yes. In comparison to hydrogen, it is not a perfectly pure fuel at the end of the exhaust pipe. It seems likely that it will be part of a transition to hydrogen.

Many analysts believe that renewable gas will play an essential role in the HGV sector’s energy shift until hydrogen vehicles come on sale. They believe it will provide fleet owners with an economically feasible option for reducing their carbon footprint by up to 85% when compared to diesel.

How can I find out where a biogas plant which supplies biomethane is located near me?

Organizations in the UK, such as ADBA, keep their own databases on AD plant locations.

Biomethane is produced by converting biogas to biomethane, which accounts for over 90% of all biomethane produced today.

Water scrubbing and membrane separation account for about 60% of global biomethane production today, with upgrading technologies taking advantage of the varied characteristics of the various gases included within biogas to separate them (Cedigaz, 2019).

In terms of waste-derived biomethane, most EU countries are phasing out landfill-based waste management systems, which could result in a rapid decline in landfill gas production, putting anaerobic digestion of food waste, sewage sludge, industrial waste, and agricultural residues in charge of biomethane production.

The use of straw as a feedstock for biomethane synthesis is an exciting breakthrough in this regard. Since 2014, VERBIO AG, a German biofuels company, has been operating a biomethane production facility completely based on straw, with the help of the European Union.

With the purchase of a stake in Clean Energy in May 2018, TotalEnergies became the largest stakeholder of the US leader in natural gas automobile fuels, with a holding of around 19%. The two partners formed a 50/50 joint venture in March 2021 to accelerate the development of biomethane manufacturing in the United States.

Is it Possible to Obtain Funding for a Biogas Plant Investment?

Developed regions, particularly Europe and North America, have been lucky in attracting a slew of biomethane investments, owing to the tremendous progress the renewable energy sector has achieved in those areas over the years.

However, in emerging regions such as the Asia-Pacific, investments, such as venture capital, into feasibility studies on green energy have been slow to pick up. Another important problem that has slowed expansion is the high green price premiums on renewable energy adoption.

This has had an impact on biomethane output as well. Reducing the cost of biogas feedstock and embracing sustainable agriculture techniques are two important ways to avoid this.

How do will they that biomethane is truly environmentally friendly?

Biomethane generation reduces the amount of methane and other hazardous gases released into the atmosphere. This is because its creation prevents methane and other gases from escaping into the environment by avoiding exposure of decomposing organic waste to the air.

Furthermore, biomethane lessens the need for fossil fuels, lowering greenhouse gas emissions in the atmosphere. Reducing the need for firewood helps to conserve forests, which helps to lower carbon dioxide levels in the atmosphere since plants absorb carbon dioxide while releasing pure oxygen. In addition to improving hygienic conditions and quality of life in rural regions, the utilisation of organic matter for biomethane generation minimises the risk of water pollution.

However, each producer will also have to provide evidence in the form of their energy balance and carbon footprint based upon recognised international environmental auditing standards before being accepted. Find out more at https://climate-change.me.uk/uk-government-action-needed-biomethane/