Skip to content
Home » Articles » Green Energy Versus Solar Energy – Which is Best?

What are the Main Green Energy Sources?

Green energy is a form of energy that is generated from renewable resources, such as geothermal heat, sunlight, rain and waves. It is clean, environmentally friendly, and is a great way to help the planet. But what is it, and how can we benefit from it?

Let us take a brief look at each, their distinctions and similarities, and how each contributes to the transformation of energy as we know it. 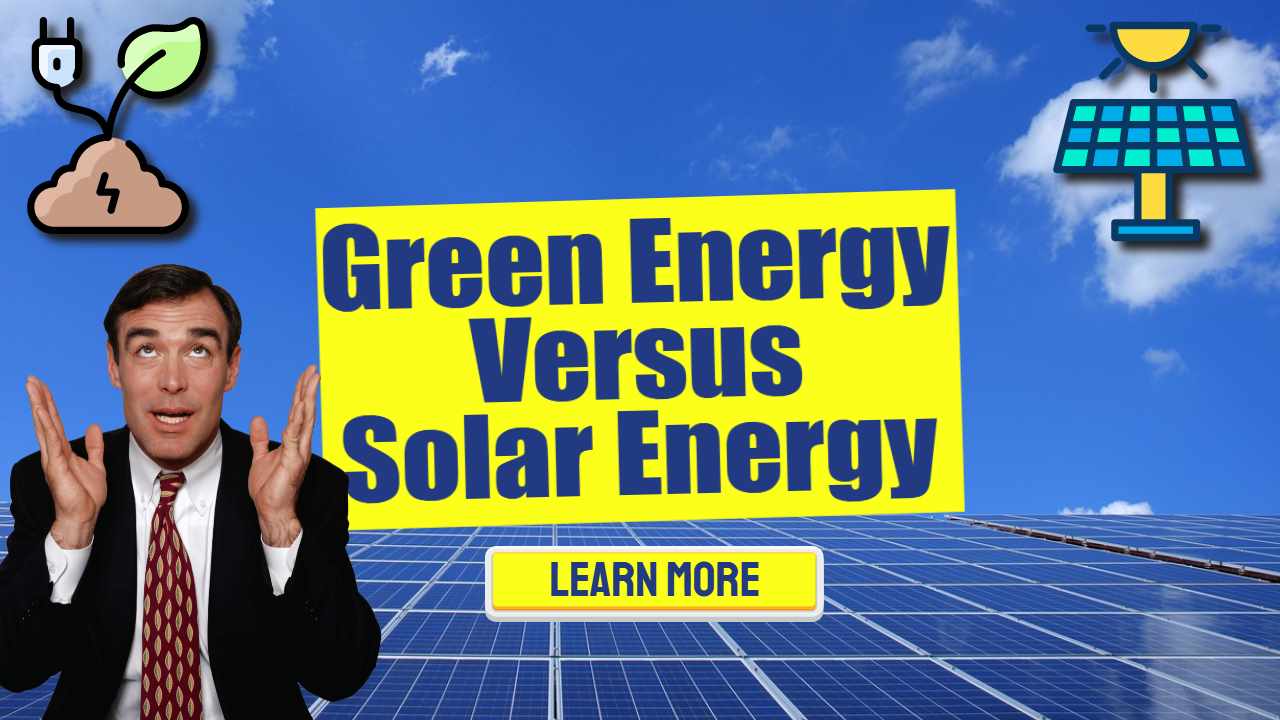 The term “green energy” is often used interchangeably with “green” electricity. This is often produced from the anaerobic digestion of biowaste. Biowaste takes the form of anything from manure to food waste, it also encompasses crop waste such as straw and rice husks.

The range of biowastes available is very wide and largely unexploited, so there is plenty of potential to make more biogas. The raw biogas is further cleaned and called biomethane. As explained here: https://blog.anaerobic-digestion.com/biomethane-plant-advantages/ biomethane is used as a fuel to replace natural gas (a fossil fuel) and can fuel conventional reciprocation engines including cars, trucks and buses when their engines are specially converted and tuned.

Here are a few examples of green energy sources:

Geothermal energy is energy that is stored deep inside the earth. It has long been used for bathing and has the potential to produce 10 times more electricity than coal. Although geothermal energy requires drilling, this natural resource can yield more than enough energy to run a turbine. In addition to being green, geothermal energy is a huge resource when it is harnessed.

Hydropower is the creation of power from naturally occurring water sources, such as hydropower dams, and river and tidal barriers. It can be produced on a large scale and is considered to be green energy.

Wind turbines and windmills both deliver wind power as a green energy source and can also be used to power from a single dwelling or mill to a whole neighbourhood or town.

Wind power is certainly green. But it isn’t available to all people. Unlike light which is available everywhere, many places are not very windy.  Turbines need wind to operate. But when combined, these two sources can provide plenty of energy to a city.

Technically, wind energy is a kind of solar energy. When the sun’s rays heat the uneven surface of the Earth, hot air rises and cold air sinks. The wind provides a kinetic (motion-based) kind of energy created by this variation in air pressure.

It is also possible to harvest the heat from household and commercial waste materials and burn them to generate electricity. This is done inside huge buildings in many cities. These are known as ERFs (Energy Recycling Facilities) which until recently were probably just known as Council Incinerators.

This is energy from burning wood and charcoal. it discharges carbon dioxide just like any energy recovery method, but scientists do not count the CO2 from this source when calculating carbon emissions as a greenhouse gas source. That’s because the carbon dioxide from burning wood is assumed to be removed quite soon when the forest or woodland regrows and the tree growth is replenished.

While geothermal is particularly effective in places where it is easy to tap, wind and biomass are ideal for other locations. Depending on your location, wind and solar may be more suited for your specific needs. Ultimately, green energy has the potential to replace fossil fuels in the future. Its versatility and low cost make it an attractive choice for many industries.

Solar energy and geothermal energy are, literally, worlds different. They do, however, have more commonalities than distinctions. After all, these are two of the greenest renewable energy sources available today.

The Benefits of Green Energy

There are many benefits to green energy, including lower prices and more energy. The first is a reduction in pollution. The latter can be produced on a small scale at home and is the most efficient option for powering a home.

On a larger scale, solar power can be used in large solar panel arrays. The latter is more efficient for supplying towns and industry. It can be used for lighting, cooking, and even in a household for heating.

Hydropower can be used for power generation. It is most commonly used to produce electricity in rural areas. It is best suited for higher altitudes.

Another type of renewable energy is wind. It is a renewable source of energy that is a good fit for offshore sites. However, it requires a large amount of maintenance.

Using Solar Energy to Heat Water and Power Your Home

There are a number of technologies that utilize solar energy, but one of the most popular is using it to heat water or power your home.

The sun is a large source of solar energy, so harnessing it is not difficult. Installing solar panels can be the fastest and most cost-effective way to start using green energy in your home. Whether you’re looking to heat water or power a home, solar technology is an excellent option. Let’s look at some of the possibilities.

These materials are called “photovoltaics”. They are also referred to as photovoltaic modules when joined together to form a “solar array”.

This technology uses the energy from the sun to power a steam turbine. This steam generates electricity. Thousands of photovoltaic cells can power large buildings and even towns.

In some cases, solar panels can the main source of electricity for an entire city when paired with battery storage for overnight power. These technologies have become much cheaper to install recently, and have very low running costs. Since the covid pandemic, when all fossil fuel costs rose, solar energy (electricity), competes with or is actually cheaper than, conventional (fossil fuel) power plants.

In some countries, such as India which have to import much of their fossil fuel oil, and gas solar is routinely the cheaper option.

You can also use absorbent materials to harness solar energy. These materials absorb sunlight in the daytime and release heat when it gets cooler at night.  The best systems incorporate lenses and other technologies to maximize the use of the sun’s light. Solar panels provide passive solar energy, and these “photovoltaics” can also be installed on rooftops.

Using active solar technologies for generating electricity is a viable alternative to fossil fuels. It doesn’t generate emissions while in use, and the energy produced is free of cost once the capital spend to build the solar installation has been repaid. These renewables do not produce greenhouse gases, and can even save money.

The main problem with fossil fuels is that they produce greenhouse gases. In contrast, renewable sources of energy are clean and do not pollute the environment. Aside from producing electricity, these power sources also reduce the carbon footprint of cities and the planet.

Besides providing heat and electricity, solar power also offers other benefits. By using solar panels, you can generate power from the sun without any physical fuel to buy. The energy generated by solar energy can also be used very effectively to create light for indoor lighting when a battery is used.

Recent studies have shown that owning a solar energy system will increase your home’s value, boosting your property’s resale price. If you install a solar panel and stay in your house the energy generated from a solar panel can be used for lighting, cooling, and other household needs.

Using photovoltaic cells the sun’s energy is transformed into electricity through the materials of the photovoltaic cells. This type of technology can be placed on buildings and fields. While it is inexpensive and quick and simple to do the benefits of solar power are numerous.

Other Forms of Green Energy Versus Solar Energy

Solar energy is abundant and sustainable because it satisfies current requirements without jeopardising future ones. We cannot possibly utilise too much solar energy. The sun gives us more than enough radiant or solar energy to more than 10,000 times the planet’s total energy consumption.

Solar energy, being a renewable source of energy, is significantly more ecologically benign than traditional forms of non-renewable energy, notably coal which accounts for over 40% of all greenhouse gas production. Unlike coal-fired electricity, solar energy does not contribute to climate change by emitting carbon dioxide.

Wind and solar energy are the renewable energy industry’s heavyweights. They offer electricity to the world’s densest populations and most remote locations. The other forms of renewable energy are also worthwhile and needed if the COP26 2021 Climate Change Conference targets for avoiding runaway climate change, are to be met.

Concluding our Article About Green Energy Versus Solar Energy – Which is Best?

We’re banking on the world’s two largest producers of green energy to help us break our reliance on fossil fuels. However, can they both compete with the non-renewable energy industry’s titans, or is one area a more attractive investment?

Solving the energy issue is a critical task for the twenty-first century. Perfect answers will be difficult to find, not only because of the vast disparities in political and popular support for sustainable energy around the globe. But also because of the substantial knowledge necessary to meet the numerous issues inherent in the global energy environment.